In the first blog of this series I wrote an introduction to distance fields – a technique for representing geometry in a texture. For each pixel of a distance field texture, we store the distance from that pixel to the edge of the geometry. Using a special shader we can then reconstruct and render that geometry very efficiently. In this episode I’ll expand distance fields to signed distance fields, which are used to represent solid shapes.

The code for this series can be found on git hub here.

From unsigned to signed fields

Previous we saw this distance field for a line segment, and how it could be used to render not just the original line segment, but also fatter/thinner versions of it: 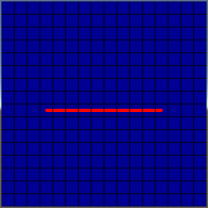 However, what if we want to represent a solid circle with a field. Simple distances are all well and good with a line, but to reconstruct a solid shape, our GPU needs 1 extra piece of information per pixel – is it inside or outside the shape? We achieve this quite simply by using the sign of the distance. A negative value represents a point inside the geometry, and a positive one represents a point outside it: 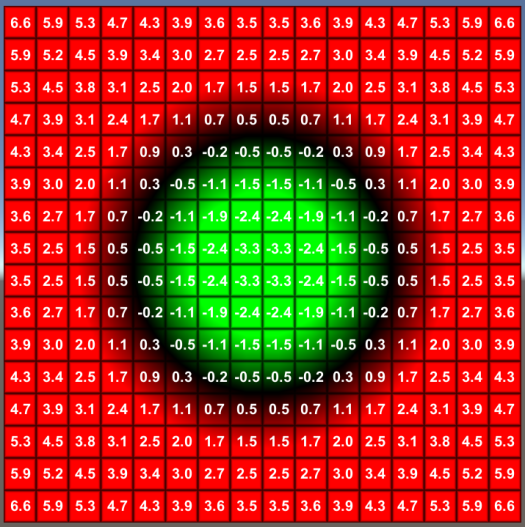 Here you can see both the stored distances in our field, with those distances also represented as a pixel colour, where green is negative and red is positive. The things to note are:

The simplest first step to take is to try running our earlier shader against this new texture and see what happens. As a reminder, here’s the code we finished with last time:

Running against this new field, surpringly, it ‘just works’:

With absolutely no changes to code, the old shader correctly renders our circle shape, and the ‘border width’ and ‘offset’ properties both function as they did before. It is easy to see why – our shader simply tests to see if the distance value is less than our border width. As pixels inside the circle store negative distances, these pass that test and end up being rendered as solid.

However, what if we want to take this a step further and introduce separate ‘fill’ and ‘border’ colours for our shape? As it happens, the modifications to our shader are quite simple:

Here we have made 3 key changes: 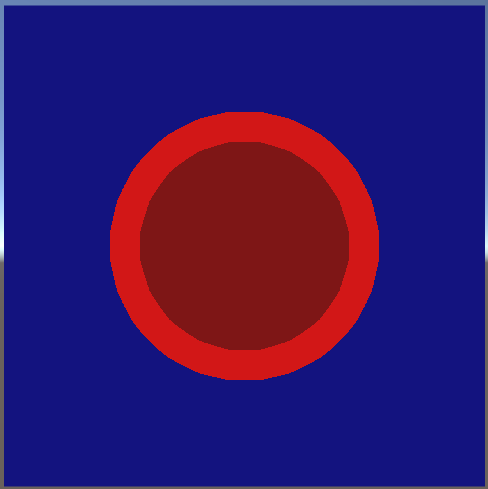 For the first time so far, we can also see a clear difference between adjusting _BorderWidth and _Offset. The offset affects the distance value used in all calculations, making the shape as a whole fatter/thinner:

As you can imagine, with these 2 properties we can now create circles with any radius and border size, all using the original circular distance field from the top of this article.

Up until now we’ve dealt with some very simple primitives, however signed distance fields are extremely flexible and can be used with any sort of geometry. Whilst I will go into more detail on field generation in a later post, for now, know that we can very easily merge 2 shapes together by sampling the distance for each one and picking the lowest of the 2: 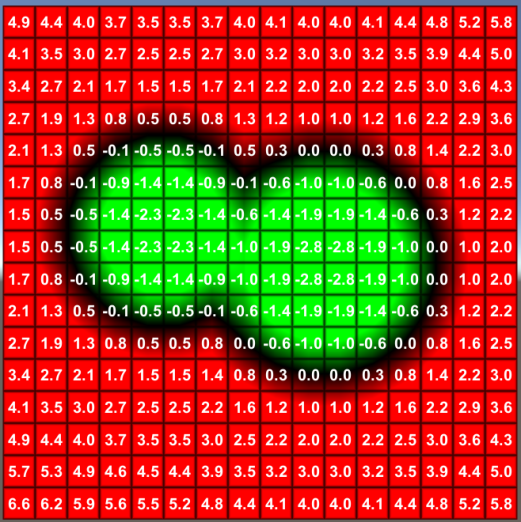 Here you can see our field for 2 overlapping circles. Note that pixels on the left contain distances to the left circle’s surface, as it is closest, and visa-versa on the right. When applied to this new more complex field, our shader ‘just works’:

Or some more complex combinations (with an added rectangle!):

As I mentioned in my previous post, it is still worth remembering that the above images are around 650×650 pixels each, however are generated entirely from a simple 16×16 distance field texture. The most visible artefacts as a result of this low detail are the almost ‘polygonal’ straight lines where we might hope for curves:

However, even stepping up to a relatively low resolution 64×64 texture, these artefacts rapidly become hard to spot:

All the code for this series can be found at: https://github.com/chriscummings100/signeddistancefields